July meetings were on the 3rd and 17th and were pretty routine?mostly authorizations for various financial payments, transfers, and bill payment. They did approve the Hawk Street curbing project (petition and hearing previously reported). The curb was to be 6 inches thick and 18 inches in depth, following all village regulations, and at the expense of the owners of the adjoining land. It was to be completed before Oct. 1, 1916, and notices were to be sent.

Bills were authorized for payment, and various financial transfers were approved.

F.H. Field (constructed 72 feet of sanitary sewer in Washington Road) and Carrie E. Callen (170 feet in Bruce St.) were to be reimbursed as the lines are now made part of the village system.

?Mr. F.H. Field (Light Committee) reports that he has looked into the conditions existing at the corner of Lark & Toll Streets with regard to street light and recommends that a 40 candle power street lamp be installed at that point.? A requisition would be placed with the Schenectady Illuminating Company for the same.

F.F. Lamboy and James Ransom were each granted 2 weeks vacation and the water committee would procure a man to fill their places during that time.

There was a petition from the property owners on Sacandaga Rd. to have the street paved and curbed. It was read and a hearing set for Sept. 18.

The water committee will have the leak in the water tank or stand pipe repaired when conditions are most favorable, and will connect the overflow from the water tower with the Third St. sewer.

Mrs. B. Reddy wants to connect her house to the sanitary sewer from the present manhole at Vley and Third. Approved with conditions.

The Street Committee is to resurface as much of Vley Rd. as can be done for $500.

Financial items related to sewer bonds, and bills were approved for payment. 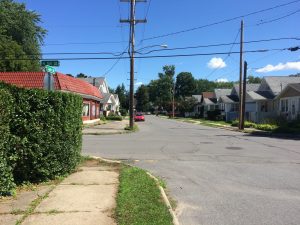 Lark and (N.) Toll today. A 40 candlepower light is approximately 30 watts. The closest thing you will likely have in your house today is a 25 or 40 watt bulb.