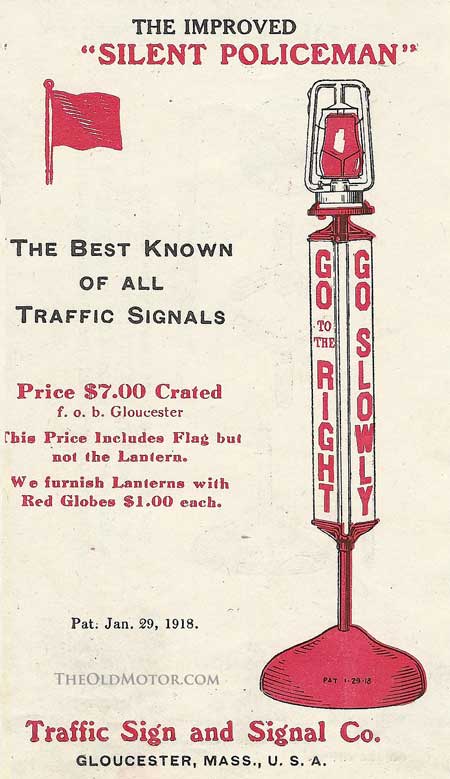 (A silent policeman was authorized by the board in March 1917.)

[As March was the time village elections were held and the beginning of the fiscal year, there is a lot going on!]

The office of the Treasurer will be at the Village Hall and all transactions will take place there, and all records and village property kept there. Salary will be $300.

Propositions to be published and posted before election day, which is March 20th:

The Treasurer?s report to be printed, along with summaries of the others, and mailed out with the water bills.

The budget for the next fiscal year was submitted, as follows:

Interesting items: the Street fund included money for a driver and horses, and the Health Fund planned to cover expenses for milk inspection. (No details provided.)

Bills submitted to be paid.

Mr. F.F. Lamboy appointed Superintendent of Water & Sewers and Plumbing Inspector for one year at a salary of $1200.

Charles W. Matthews appointed as Assistant to the Superintendent of Water & Sewers at a salary of $1000. He will pay rent of $12.50 per month for the village house at the pumping station when it is completed.

The Superintendent of Water & Sewers can employ laborers at a rate not to exceed $2.25 per day.

The Street Commissioner may employ George Keefer as driver of the village team for $70 per month, and he may hire laborers as needed at a rate not to exceed $2.25 per day.

Maurice B. Flinn was appointed Village Attorney at $500 per year for regular services. Any litigation will be paid separately. He may also earn a 1% fee on bonds or obligations he may sell.

The Schenectady Trust Company is the official depository for Village funds.

The President is empowered to provide police protection as necessary, not to exceed $25 per month.

W. F. Chadsey is appointed Village Engineer at $7.50 per day.

?The Village President [will] be given full power to direct the Village Engineer to furnish grade stakes when he deems it necessary and proper.? [No indication of what grade stakes are–]

The Schenectady Gazette is the official newspaper for all required notices and ordinances.

Dates for future board meetings listed.

The village will continue to rent a safe deposit box at the Schenectady Trust Company.

Burglar Insurance for the Village Hall to be purchased at $1000 coverage for the year.

Accounts for the fiscal year ending Feb. 28, 1917 were examined and were found to be true and correct by the Finance Committee; also the Treasurer and Clerk have accounted for all monies.

The Street Commissioner may purchase such gravel as he may require, not to exceed $25 per month.

The Water and Building Committees will prepare plans and specifications for the building near the water pumps, proposition approved by vote at the elections, and submit as soon as possible.

The President is authorized to enter into a contract with GE for equipment at the pumping station, as quoted Feb. 2, 1917.

The Building Committee will have the Hook & Ladder Company rooms repaired and redecorated, not to exceed $80.

One silent policemen to be purchased from the Traffic Sign Co. for use of the Police Department. [http://theoldmotor.com/?p=139408; also see http://www.crotonfriendsofhistory.org/dummy-forever/. You may have seen the ?silent policeman? still in Canajoharie. We don?t know, however, exactly what the Scotia one looked like.]

The Street Commissioner will purchase 2 tons of hay at $16 per ton.

A water gauge will be placed in the home of the Water Committee.

A communication from the Mayor of Schenectady will be referred to the Railroad Committee. [Contents was not mentioned.]

Bonds for the Treasurer and Clerk accepted.

Property owners to be notified of installments due for road improvements: Schon-o-we, Mohawk from Ballston to the village line; Mohawk & Washington.

Proposals put out for the sewer work in Sacandaga Rd.

The Superintendent of Water will have the hydrants painted.

Bills were submitted for payment.

Bids received for the sewer project were all too high and were rejected.

A petition was received for a sidewalk on both sides of Third St. A hearing will be held May 21.

Plans for a house at the pumping station were accepted and will be sent to contractors.

The Clerk will purchase 3500 stamped envelopes for use of the Water Department (maximum $76).

As to the application of Lewis Marino for a street light on Cuthbert St.??conditions do not justify the expense at this time.?

The President will authorize any necessary steps to protect the Water Pumping Station.

The Street Commissioner is authorized to spend no more than $50 to improve Reynolds St.

The Engineer will prepare a profile showing the proper grade for Wyman St. (between Riverside & Larkin) and Larkin (below Wyman and Reynolds).

A special meeting held about the bids for sewers on Sacandaga Rd.