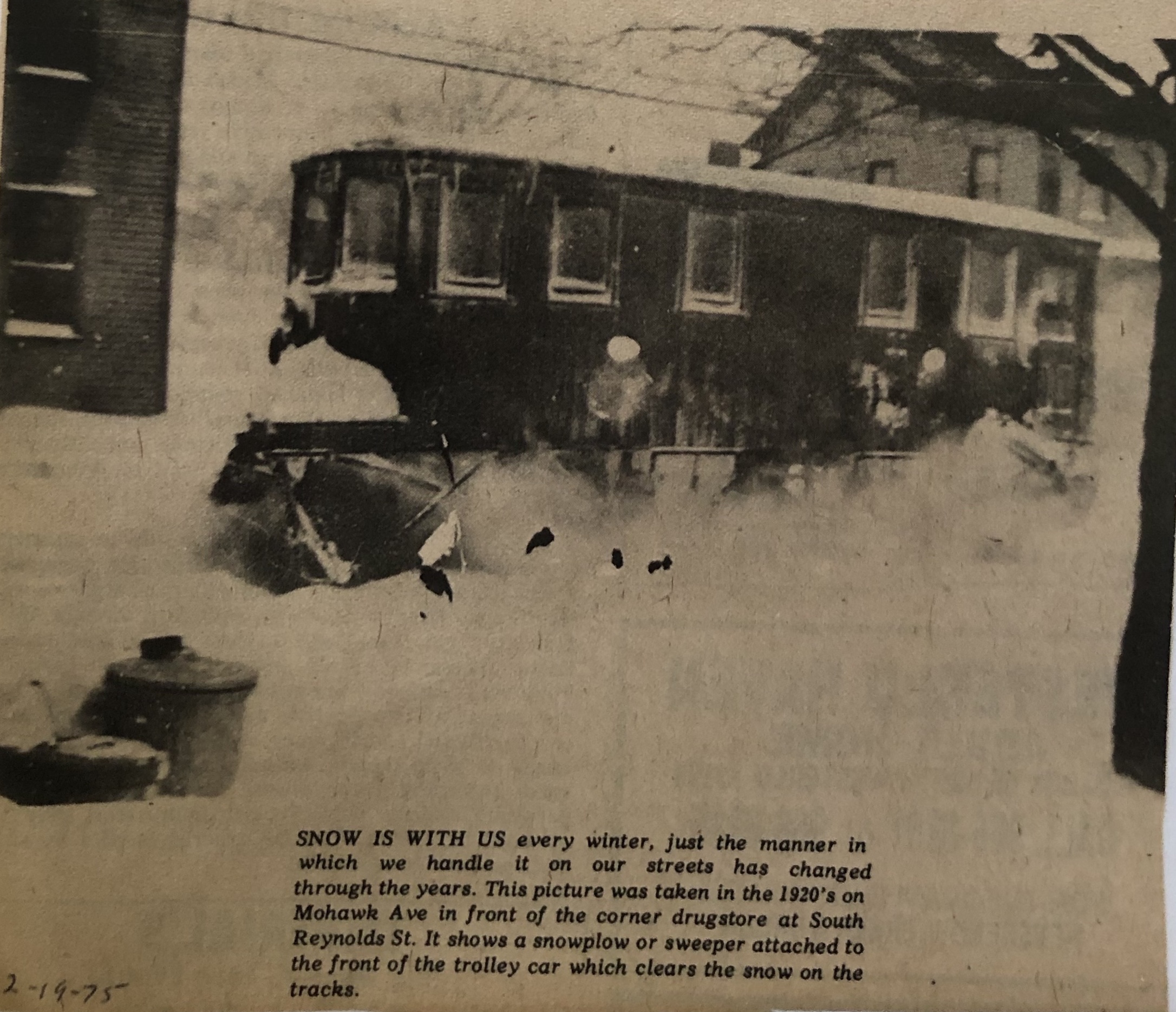 Spring is almost here! But there’s time for a few more Scotia winter stories to close out the season.

The newspaper clipping of the trolley photo is not very clear, and we don’t know what newspaper it was, but you can see the rotary brushes that kept the track clear. The trolley came across the old bridge, up Schonowee, and along Mohawk to Toll St. Another route split off and went up Ballston, Wallace, Fifth, and then Vley to near the train tracks. Power came from overhead lines.

Michelle Norris, and helpers, made oral history tapes in the 1970s and 1990s with several community members. There are many great stories about Scotia, and here are some winter ones looking back at folks’ boyhoods around 1905 to 1920.

School was never cancelled, no matter the weather, so kids had to fight through the drifts and snowstorms to walk to school. (In the early 1900s the Mohawk school was right on Mohawk Ave. where the Village Parking Lot is today.)

Great fun was had by riding the 8-kid toboggan that was kept in the village equipment barn (and sometime horse barn) on Ten Broeck where the Village Hall is now, behind the firehouse. With a good push, and sometimes with the track iced down by the firemen, they would be able to slide down Ten Broeck almost to the river. There weren’t many cars in town, but the trolley did go back and forth; one kid was supposed to warn the others when it was coming so they could wait. Of course, one time that didn’t happen and the sled ran right into the cow catcher of the trolley—apparently no one was hurt, but after that the sled was kept locked up.

If there was an ice jam from an early thaw, the Mohawk backed up and flooded the islands and the low parts of the shore, and backed up into Collins Lake as well. If it froze back up quickly and stayed cold, there was great skating until March.

Horses and sleighs were raced on the river and on Collins Pond.

Another winter event was watching the men cut ice on Collins Pond. There was a big ice house (about where the upper ball fields are now) and a conveyor belt which pulled the ice up from the lake and stored it for everyone’s ice boxes—no refrigerators yet!