Old view of the Flint House #1 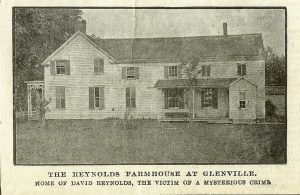 This is the earliest picture we’ve found of the Flint House. It appeared in the Utica Saturday Globe in May 1901, as part of?a long article about the murder of the owner, David Reynolds. He had been killed out back in one of the many barns, and, while several arrests were made, no one was ever tried for the crime.

You can see the house had a very ornate (and likely Victorian) porch, and it had a long ell in the back, nearly the size of the front part of the house. Also note the interior chimney–Lillian Flint moved the chimney to the outside of the house and rebuilt the fireplace when she lived there.

The Historian’s office has very few historic photos of the Flint House. If you have any (from any period up to about 1990) among your personal photos, I’d love to see them! Contact me through the village office, or email historian@villageofscotiany.gov