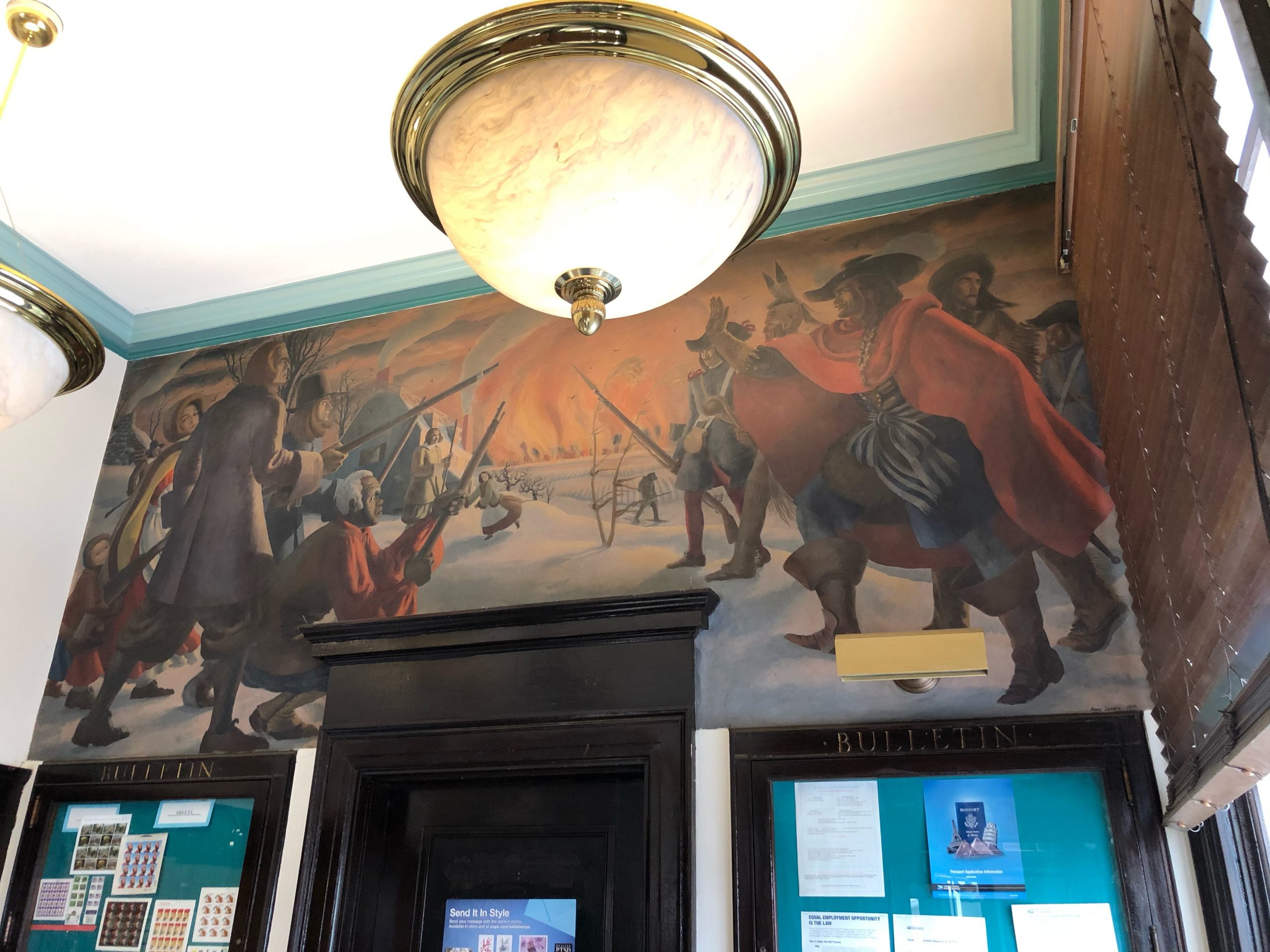 Frances Anderson Sloan was the Village of Scotia Historian from November 1959 until her death in May 1965. She wrote a column, ?History Walks with Scotians? twice a month for the Scotia-Glenville Journal, and we have been gathering all these articles in one place as reference materials. She was diligent in her research and while new facts may have come to light since then, and there are now new ways of expressing some historical concepts, her essays are still interesting and useful after these 60 years.

This year, Glenville?s bicentennial, I will be ?reprinting? some of these articles that seem of particular interest in 2020. My comments in brackets [ ].

We have just passed the two-hundred seventieth anniversary [now 330th] of the Massacre of Schenectady by the French and Indians on the night of February 8-9, 1690. The Scotia Post Office has a constant reminder of this event painted on the right hand wall as you enter. This painting was done by Amy BlaisJones in 1942, commissioned by the Fine Arts Section of the Federal Works Agency, Public Buildings Administration of Washington. It depicts the sparing of the life of Captain Johannes Glen and his family the morning of February 9, 1690. The moment is tense. With shotgun in hand, he awaits the approach of the French leader and his Indian followers, not knowing whether they were coming to kill or to spare his family. One of the slaves kneels at Johannes Glen?s feet while other forlorn folk huddle in the background. Smoke comes from the ruins still smoldering across the river.

Of course the story of the sparing of these lives is familiar to most of us. Captain Glen had shown kind hospitality to wayfarers in need, among them French priests, for many years. For this, Governor Frontenac, dispatcher of the invading expedition, had ordered his men to spare the family and property of Captain Glen. Another dramatic aspect of this event was also the unavailing effort of Captain Glen to arouse the Schenectadians to the possibility of such an attack. Because of a political quarrel with Albany and the association of the idea of military preparation with Albany, and also perhaps because of a bit of Dutch stubbornness, many Old Dorpians[*] felt hostile to Johannes Glen?s suggestions and made it plain that his place was across the river. It is believed that from scouts he actually had information of the approach of the enemy. An Indian woman was sent to warn the Dutch ?Hausfrauen? but they would not listen to her.

The segnel [sic] [sequel?] to the event pictured in the Post Office is also dramatic. The French and Indians allowed Johannes Glen to cross the river to pick out the members of his family from the survivors. He thus rescued about sixty people before the French and Indians began to realize they were not all relatives. Captain Glen succeeded in persuading the enemy not to take the women on the long trip to Canada where the other survivors were led; some to be tortured, some to escape. In about 1840 the artist Tompkins H. Matteson painted the scene of Johannes Glen claiming the survivors in front of the smoking Reformed Church. This was done for Gerardus Beekman of New York, a relative of the Sanders family. A small reproduction of it is the frontispiece of a local history by W.N.P. Dailey. [**]

A current edition of a Ticonderoga newspaper reports that Captain Johannes Glen gave the English name to Ticonderoga in 1690. It is interesting to speculate whether he did so after the massacre, perhaps as he may have journeyed north to see about the captives taken to Montreal by the French and Indians.

*Dorp is a Dutch term variously translated as town, village, hamlet; the term ?Old Dorp? was often used to refer to Schenectady, and you might see it often if you read older newspapers or books.

The story of the Schenectady Massacre has been told in many sources over the years, almost since the day it happened.

There are many books on Schenectady history in the public library, and here are some references you can find online:

A search of Google Books will also pull up several histories of the Schenectady area.