The Tree at Wallace and First

Home / Historian / The Tree at Wallace and First 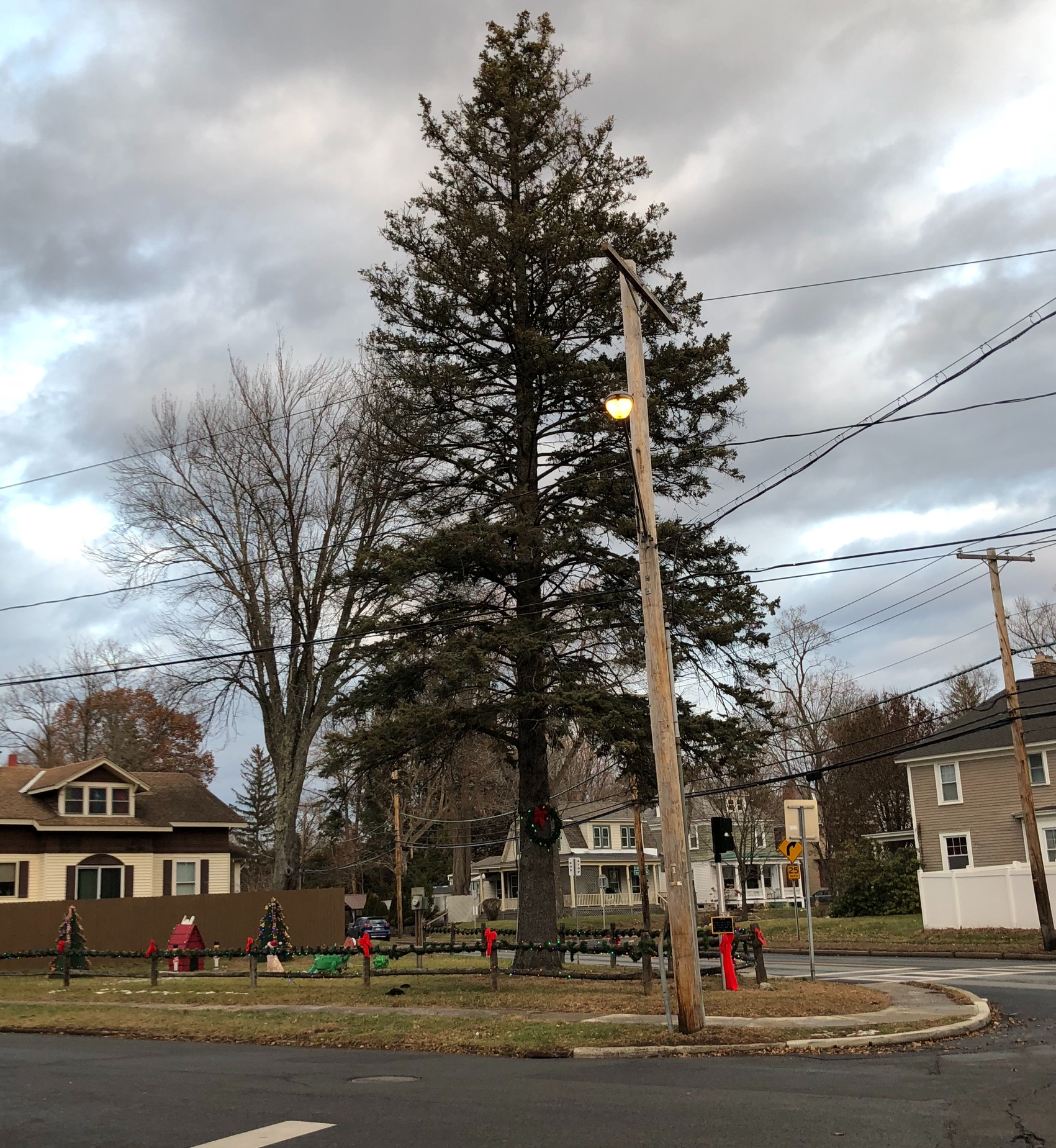 This tree, which many of us pass almost daily, has a very interesting history. It was planted in 1932 to commemorate the bicentennial of George Washington?s birth. The story was told in a newspaper clipping from the Scotia-Glenville Journal, January 1962. Under the photo is a transcription of the caption, followed by the article that appeared next to it. 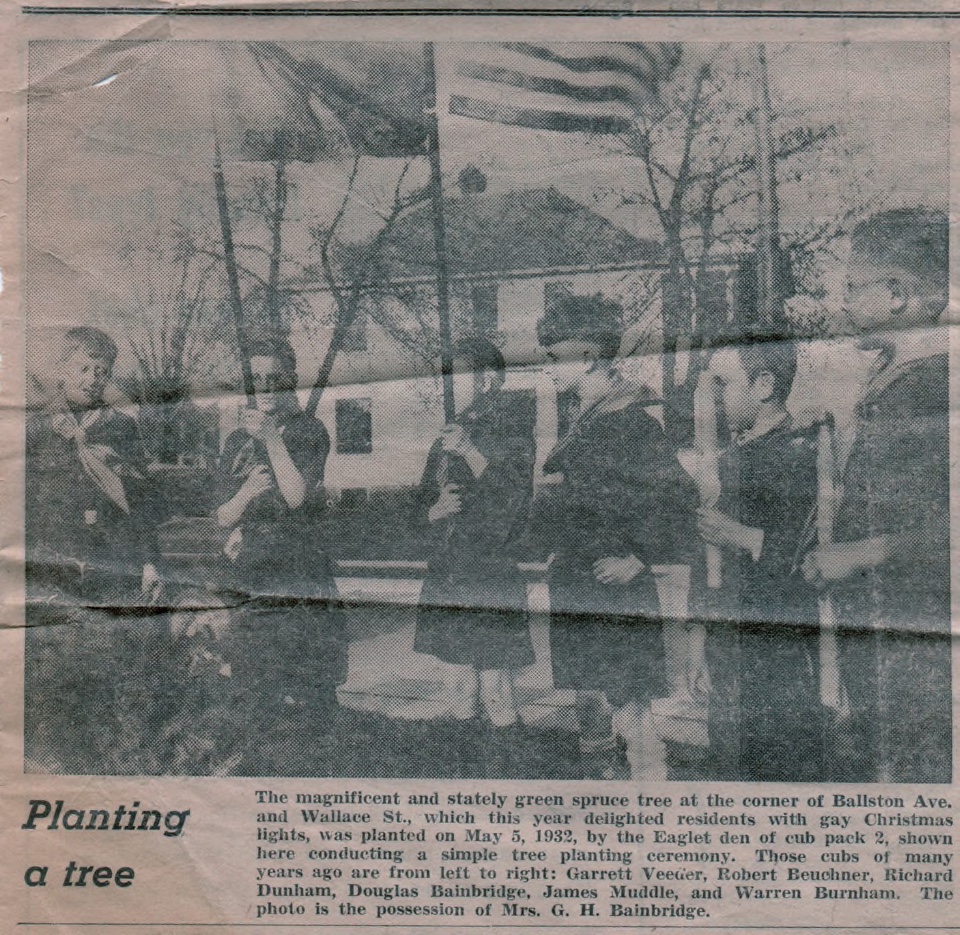 Caption to photograph:
Planting a tree
The magnificent and stately green spruce tree at the corner of Ballston Ave. and Wallace St., which this year delighted residents with gay Christmas lights, was planted on May 5, 1932, by the Eaglet den of cub pack 2, shown here conducting a simple tree planting ceremony. Those cubs of many years ago are from left to right: Garrett Veeder, Robert Beuchner, Richard Dunham, Douglas Bainbridge, James Muddle, and Warren Burnham. The photo is in the possession of Mrs. G. H. Bainbridge.

?Mayor Earl Campbell first told me of the tree?Scotia?s own living Christmas tree at the corner of Ballston Ave. and Wallace St. Bill Adams of the Scotia department of public works gave me the few facts he could find about the tree?s planting and its present decorations. And a small article appeared on the editorial page of the Dec. 20 Journal.

But then things started happening. Mrs. J. H. Steadwell, 10 Vine St., contacted the Journal. She had some clippings on the original planting of the tree! And here is the rest of the story.

From Mrs. G. H. Bainbridge, 32 Washington Rd., I received a clipping about the planting of the tree. On May 5, 1932, the Eaglet den of cub pack 2 held a simple tree-planting ceremony in honor of the George Washington Bi-Centennial. The entire pack under the leadership of Harlan H. Barney, cubmaster, attended the tree planting. Mr. Bainbridge, then committee chairman of pack 2, received permission to plant the tree on village land. The tree, donated by Mr. Bigwood of the Bigwood Nurseries on Saratoga Road, was a Colorado green spruce less than tree feet tall. The cubs planted the tree, placing at its roots a container with information about the cub pack and about the tree-planting ceremony. The Eaglet den put on the program, with Garrett Veeder, Thorman Hulse, Douglas Bainbridge, Richard Dunham, Robert Beuchner, James Muddle, Warren Burnham, and ?Cubs Franklin and Scott? taking part.

According to this original clipping, ?it is the wish of the cubs that this spruce may grow into a beautiful sturdy landmark, not only to honor the great Father of the country but to make the village more beautiful by its presence.?

?The Eaglet?s Spruce? written for this original ceremony is as follows.
A tree! A tree! Let?s plant it here
And watch it grow from year to year,
Its leafy branches spread on high
Always reaching towards the sky,
Rain to quench its thirsty roots,
Sun to make it grand in looks,
Snow to shield from wintry blast,
And loved by all who this way pass.

All the boys of the Eaglet den who helped plant this tree received a certificate from the American Tree Association, stating that they had planted a tree in honor of George Washington and that they were members of the association.

More than fifteen years later, near Christmas 1947, cub pack 2 had an informal reunion at the tree. It was now more than 30 feet tall and was being decorated by the village. In a heavy snow storm, the original Eaglet den, now grown men, told the story of the tree?s planting, and Douglas Bainbridge read ?The Eaglets? Spruce? just as he had at the original ceremony. The reunion was supervised by cubmaster Adolph Pinkney and the pack committeemen. About 60 members, parents, guests, and former members of the pack attended. Among the official guests was Mayor William Turnbull.

?Now 15 years later, the tree is in the news again. 55 feet tall, it is decorated by the village department of public works, with the assistance of a fireman and the fire department?s long aerial truck. And now it requires 250 lights.

This is the way a story grows. And this is the way a tree grows. Cub pack 2 and the original Eaglet den have seen their memorial to George Washington turn into the ?beautiful sturdy landmark? they hoped for. Many thanks to the people who helped me enlarge this story. And our grateful appreciation to the Eaglets who thought of beautifying the village thirty long years ago!

[Spelling, capitalization, etc., as in the original. Remember ladies?we were almost always called by our husband?s name only, in newspapers and most other public documents. ?B.C.]