The music industry got right to work?producing popular songs about the war. Below is the cover art (often?quite elaborate) and lyrics?to the chorus for several songs. The first two (as well as many other songs) can be found on the website www.firstworldwar.com. There you can listen to original recordings of this music, just as the folks 100 years ago did.

Not sure what our debt to Lafayette and France?is??Look up?your Revolutionary War history, especially the Battle of Yorktown.

Let’s start with one you probably know already: And forever in peace may you wave.

You?re the emblem of the land I love,

The home of the free and the brave.
Ev?ry heart beats true under Red, White, and Blue,
Where there?s never a boast or brag;
But should auld acquaintance be forgot,
Keep your eye on the grand old flag.? One thought of mother, at home alone,
Feeble and old and gray;
One of the sweetheart he left in town,
Happy and young and gay.
One kissed a ringlet of thin gray hair,
One kissed a lock of brown,
Bidding farewell to the Stars and Stripes,
Just as the sun went down. Somewhere in France is Daddy
Somewhere in France is he
Fighting for home and country
Fighting, my lad, for liberty
I pray ev?ry night for the Allies
And ask God to help them win
For our Daddy won?t come back ?till the Stars and Stripes they?ll tack
On Kaiser Williams? flag staff in Berlin. Now?s our chance to pay our debt
We owe France and Lafayette
And never were we better off than now.
Our boys to France have gone
To drive out the Turk and Hun
And Lafayette, we?ll pay our debt to you. If I am not at the roll-call,
After the fighting is done,
Won?t you be kind to my mother,
Just for her soldier son?
Tell her I know how she loves me,
And prays for me constantly,
May angels attend her,
Brave comrade befriend her,
And kiss her goodbye for me! Wake up, America,
If we are called to war,
Are we prepared to give our lives
For our sweethearts and wives?
Are our mothers and our homes worth fighting for?
Let us pray, God, for peace, but peace with honor,
But let?s get ready to answer duty?s call,
So when Old Glory stands unfurled,
Let it mean to all the world,
America is ready, that?s all!

Besides stirring us up to patriotism, the music business wanted to help with the war effort as well.

Below is a close-up of the notice on the front cover, and then two pieces of music together–you can see how much smaller they sometimes made them to conserve paper. (The larger one, typical at that time, is 10.5 x 13.5 inches.) 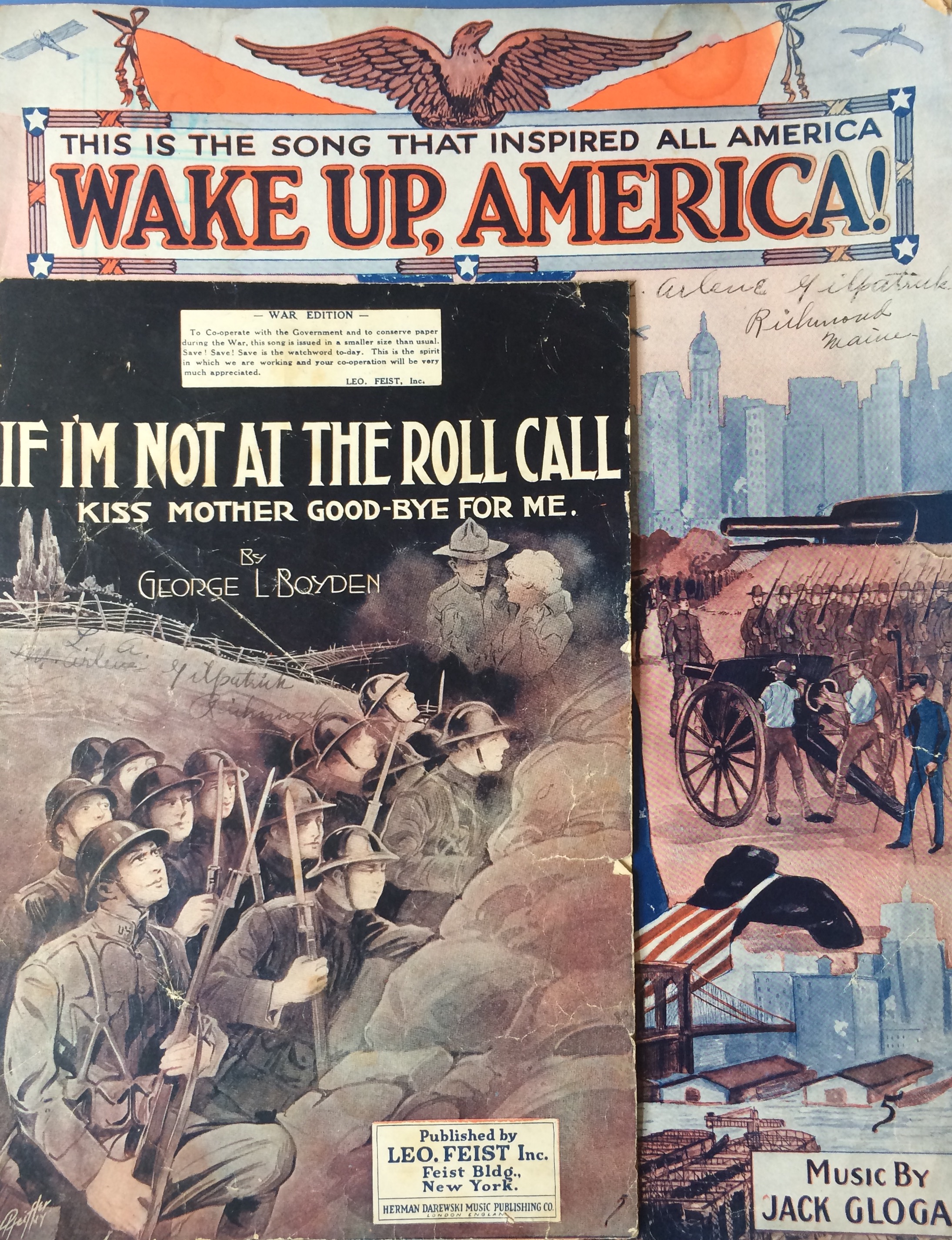 If you didn’t catch the American Experience World War I series on PBS, you may be able to watch it online, or check the schedule for additional airings.

The National Archives has a link to its vast collection on the homepage at www.archives.gov

Gov. Cuomo has also announced a new website for the World War I Centennial Commission at
www.ny.gov/programs/new-york-state-wwi-centennial-commission